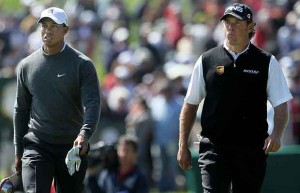 Tiger Woods and Lee Westwood at Pebble Beach, US Open - June 2010.
The slide in golf performance by Tiger Woods since his disgrace as a husband and father has finally allowed him to be overtaken by Lee Westwood as the number one golfer in world rankings.  Nobody has been there longer than Tiger at more than 600 weeks during his twelve year career to date.  Greg Norman is the only golfer at plus 300 weeks to ever come close to a similar reign at the top of the golf kingdom.
Is Tiger's reign over as he slips into oblivion?  I doubt it.  No longer the prime contender to win at any tournament he enters he still proved his capabilities in his appearance at the Ryder Cup and he still draws the crowds with his ability to make the shots that no one else even tries.  He's no longer number one, but still on the comeback and will be a threat and the man to watch for years to come.
"Beware of the Tiger" is still good advice.  His career is not over and he is determined to win more than the 18 Majors of Jack Nicklaus.  He will continue to entertain and inspire us - at least on the golf course.  In his personal life, he has lots more work to do to recover our respect.
And that too is how business is like golf.
Keep on playing is the answer.
﻿
Learning Entrepreneurship
Uncategorized