The Four P’s of Salesmanship: “You wanna buy a book?”

The Four P's of Salesmanship: "You wanna buy a book?"

An excerpt from "Don't Do It the Hard Way" by your Uncle Ralph, Del Chatterson.

"OK," I said,  "now I have to tell my favourite story on salesmanship. Not an original and 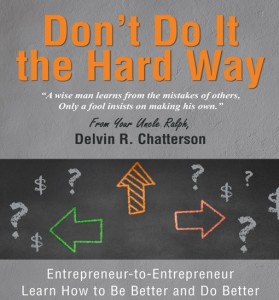 probably not even true, but very instructive anyway.” They looked a little concerned, but I continued.

“A high-powered IBM executive working in New York used to take the subway to the office everyday and he noticed there was a young man always positioned at the top of the stairs to the street with a box of books at his feet and two or three in his hands, politely asking every passerby, “You wanna buy a book?” He was there rain or shine, hot or cold, every morning and evening as hundreds of commuters passed by. After several months of observing this hard-working, polite but persistent, casually dressed, but personable young man asking everyone who passed, “You wanna buy a book?” the IBM executive stopped one morning to speak to him.”

“He said, ‘Young man, I am very impressed with you working so hard here everyday and I would like to offer you a job at IBM. We can get you started in our sales training program and within a year or two you could be making $60,000 to $80,000 a year.’”

“The young man politely replied, ‘Why thank you very much, sir, but I’m already doing better than that. You wanna buy a book?’”

Dave laughed out loud as the others smiled and he said, “I’m definitely telling that story to one of my reps who is trying too hard and making it too complicated. He’s reading books, going to courses, sitting in on Webinars, following the experts on Blogs and so on, but he gets so caught up in the process that he neglects to just ask the question, ‘You wanna buy some bikes?’. It drives me crazy sometimes listening to him on long distance to our dealers in Vancouver or San Francisco and he's rambling on about the weather and the football and the economy before he finally asks about their inventory and gets to the point, ‘Do you need some bikes?’ In fact I’m putting this on the agenda for our next sales meeting: Keep it simple and ask for the order!”

That got such a good response I couldn’t resist another sales story. I started with a short preamble.

“A suggestion I often have for sales managers is to recognize their top sales reps and get them involved by sharing their tactics with the other reps. Learn from the best. It’s also a good way to build the sales team by sharing ideas and information, like we do here in the e2eForum. If it doesn’t go well, it may be a warning sign that sales management and your sales compensation plan are promoting competition and jealousy instead of co-operation and teamwork.”

“So I have another story to help you remember that principle of sales management. (I probably should give credit to the great Zig Ziglar for these stories. But I honestly don’t remember where I heard them first; I’ve just been repeating them for years.)”

“This story is about a company selling safety glass that had a direct sales force calling on customers all over the U.S. Each year they had a sales conference where they celebrated their successes and recognized the top achievers. For several years, old Charlie had won the top sales award, so one year they finally asked him what he did to win so many orders. He was willing to share and explained, ‘When I finally get an appointment, I sit down with the buyer and I bring out the samples of our safety glass to compare to the samples of our competitors. Then I bring out my hammer. And I smash them all right there on the conference table! Now I have their attention to make my pitch.’"

"Well that year a lot of sales reps went out with their samples and their hammers. But again Charlie won the top sales award. So again the VP of Sales asked Charlie, ‘What did you do this year?’”

“Charlie said, “I gave the hammer to the buyer.’”

Never quit selling. Get your team focused on the one thing that solves all your problems – more sales.

For more stories from Uncle Ralph and to learn more about his books, "Don't Do It the Hard Way" and "The Complete Do-It-Yourself Guide to Business Plans" visit Uncle Ralph's Books.