Results are all that matter? Wrong. Character matters.

Results are all that matter? 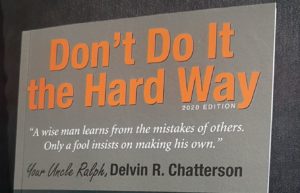 This commentary was originally posted in 2019 when the whole world was watching and worrying about the true character of well-known figures like Bill Cosby, Harvey Weinstein, and President Trump. It also appears in Don’t Do It the Hard Way – 2020 Edition.

Sometimes we learn more than we ever wanted to know about our leaders, role models, and heroes in society. Then we have an awkward question to consider: Should we dismiss everything they ever accomplished because of their character flaws and their immoral, unethical or even criminal behaviour?

Many people have chosen to ignore the character and behaviour their heroes and their leaders because they valued, respected and admired their ideas and the results they achieved. Many of them have since learned to regret those choices and recognize that character matters.

The accomplishments are forever tainted and diminished by the suspicions that they were not achieved legitimately. We’ve learned about the lying, cheating and abuses that are part of their history and assume those tactics were used to get the results they wanted.

Why is it important to assess character, morality, and ethics in choosing our leaders and role models? Because we want to be reassured that the results will be achieved according to acceptable moral and ethical principles that go beyond personal ego and self interest.

If you’re a corporate CEO, a politician, an entertainer, or an entrepreneur and business manager, your performance is continuously being assessed based on the results you achieve. Does it matter how they are achieved? Some people think not. Results are all that matter. Especially if the results are what they want and they can ignore the consequences and side-effects on other people.

Sometimes the desired results may appear to be achieved, regardless of the behaviour. Immoral, ruthless, and aggressive behaviour may even appear to have been necessary to achieve the results. Wrong again.

The apparent short-term gains will eventually be lost to long-term reactions. Those who are used and abused will get even. A legacy of accomplishment may be completely dismissed and forgotten when true character is revealed.