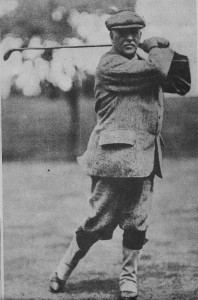 An interesting historical side note from the recent Canadian Open, compliments of the Canadian Golf Hall of  Fame and Museum (who knew we even had one?).

Believe it or not, the reigning Olympic Gold Medalist for golf is Canadian, George Lyon!  At the last Olympic games that included golf, he won at St. Louis in 1904.  We have the trophy to prove it, but have lost the gold medal since the 1930's.

George Lyon won at the age of 46, over an American in his 20`s.  Lyon was already a star athlete in rugby and cricket, plus holding the national record in pole vaulting, before turning to play golf in his late 30`s.

Another Great Canadian hero, with an inspiring story we had not heard before.

(Another side note and also strangely inspiring story for us less athletic heroes: this year`s Canadian Open Champion, was Carl Pettersson from Sweden, who qualified dead last on Friday so went out and had a few beers, then Saturday was just one birdie putt from a 59 and won on Sunday with a 67.  Shades of the John Daly school of golf!)

My conclusion: Choose your role models carefully.  Focus on the results, not the life style.