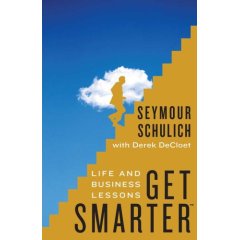 Seymour Schulich's recent book "Get Smarter" is a disappointment.
In spite of the reviews and promotional news releases that it's full of brilliant insights, it is instead full of clichés and old anecdotes borrowed from Aesop's Fables or father's favourite tales. Not the wisdom and lessons of life and business and that you would expect from a prominent Canadian billionaire.
More a confirmation of the power of money to buy respect and admiration that Mr. Schulich has already demonstrated by his conspicuous donations to Canadian universities. I don't know him, but I have an impression that Mr. Schulich is most impressed with himself and acted on the urge to say "I'm very rich so I must be pretty smart and people should listen to my advice." He offers his opinions on China, the Middle East, and his favourite movies (why is that relevant?) A good friend or editor should have told him not to embarrass himself. He doesn't need the money or the attention from writing a book.
He does have old-fashioned views and strong opinions on some subjects that are both surprising and interesting and the Appendix describing his lucky strike in Nevada is more revealing of how to become a billionaire. Still not enough to justify the price or the time to read the whole book.
A Peter C. Newman story of his life and times would have been more interesting, but probably not as flattering for Mr. Schulich.
Learning Entrepreneurship
recommended reading