“How can she be this good with these clubs?” 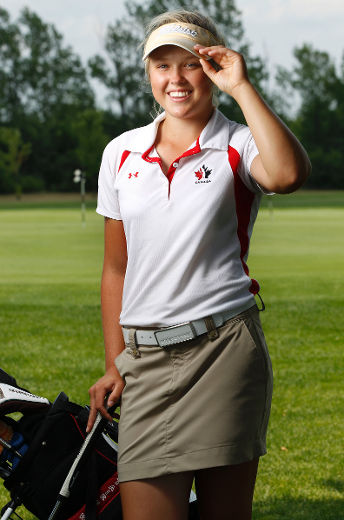 She started young and obviously has tons of talent, but she did it her way. Scott Stinson, National Post sports columnist quotes her women’s amateur team coach checking her golf bag when she arrived as a 14-year old amateur and remarking “How in the world can she be this good with these clubs.” Apparently she had a mix of brands, sizes, grips and designs that she used to make any shot she needed. Sometimes with the same club, she could bend it left or right, hit it long or short, high or low. A special talent that she developed following her older sister and parents around the golf course in Smiths Falls, Ontario. “She grew up knowing it was fun to hit stupid shots,” said her coach.

As I have been advised myself: Learn to play like a child does. Forget about the club selection, the stance, the grip and the swing technique, just look at the target and find a way to put the ball there. Then practice until you can do it consistently. In other words, keep it simple. Just do it. (My apologies for the Nike slogan as her sponsor appears to be Ping.)

Is there a lesson there for entrepreneurs?

Yes. Stop worrying about the tools and the techniques. Go back to enjoying your passion for the game and find a way to make it fun again.