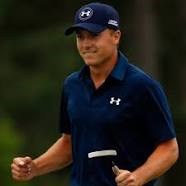 He got our attention this year.

Jordan Spieth had already had great success in college as a teenage amateur and won his first PGA tour event at only 19 in 2013. Last year he appeared regularly near the top of the leaderboard, won two more tournaments, played well for the US team in the Ryder Cup and broke into the top 10 of the World Golf Rankings.

But this year as he turned 22, we all noticed him.  He won five PGA tournaments, including the Masters, US Open, the Tour Championship and Fedex Cup, topped the World Golf Ranking three times, earned over $22 million in prize money and dominated all the individual performance awards. His consistently charming, humble and polite manner through it all have won him fans around the world and, not coincidentally, bumped his primary sponsor, Under Armour, to new levels of sales success.

So what he does he do differently to win so often and what can we learn from his approach to golf? He is obviously a talented, hard-working athlete, but so are all the top competitors he is up against.  It has to be more than talent and hard work.

Watching him and listening to him we start to understand where he gets the edge. First, he has mastered every element of the game - driving, approach shots, putting and recovering from trouble. He is near the top in every category and he does it without any drama.  Not the longest, strongest, most exciting or spectacular, just very, very good when he needs to be.  Second, he prepares meticulously to understand every nuance and peculiarity of the course he is playing. Third, he uses all the resources of his support team, including his caddy and friend, his coaches and his family. Finally, he manages his emotions, stays focused and makes good decisions during the round.  Part of that process is continually assessing his performance and adjusting his attitude, his swing or his strategy on the fly. It is part of his style to vent and talk to himself during the round.  No attempt to maintain the stoic, unemotional façade of his competitors. Sharing his emotions relieves stress for Jordan Spieth and provides clear feedback for his followers.

Consider your own management style and you may find opportunities to use his approach for better results in your business.  Remember the simple principles: master all elements of the game, prepare meticulously for every contest, use the whole team, manage effectively based on continuous feedback.

And avoid trouble if you can, but have options if you cannot.

So Tiger and Phil meet again in Shanghai and the winner is... Phil again!

Should Tiger be worried? The analysts will be talking of a slump, end of his reign, the new Phil becoming number 1. It all adds to the excitement and attraction for fans and golfers everywhere.

No competition is no fun for anybody, and certainly doesn't inspire the players to try harder or do better. Competition is good. It forces us to be wary and keep learning and improving in order to keep winning.