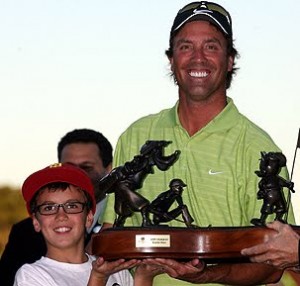 Stephen Ames won the Children's Miracle Network Classic at Disney World accompanied by his son for the tournament. How special is that?

Michelle Wie wins her first LPGA Tour event - finally! The biggest sideshow in women's golf since she was 12 years old, the "next one" has finally arrived at age 20, beating a quality field by two strokes at the Lorena Ochoa Invitational in Guadalajara. 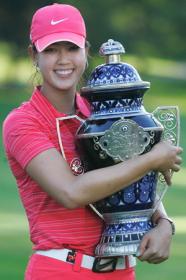 And of course, Tiger Woods proved he was worth the $3 million appearance fee by winning the Australian Masters. As he put it "I can now say I've won tournaments on every continent except Antarctica." He's waiting for the invitation. The fee may have to compensate for the challenging "conditions". But he's worth it.

(Thanks to National Post Sports for the original articles. )