In our current preoccupation with pandemic paranoia and political drama, we need to redirect our energies to more productive plans for next year. Start by looking back and deciding what is most worthy of a repeat performance.

Not a year ago, before Covid 19, and not five years ago before Trump, but ten or twenty years ago. Remember the nineties?  Before Twitter and Facebook filled all our unoccupied headspace.  Before we wasted time on another angry or inane Tweet, a much too personal post on Facebook or a self-obsessed photo on Instagram.

Remember the pleasure and the serious, revealing and rewarding communications we used to have with a thoughtful email exchange or a long leisurely telephone conversation? How long ago has it been?

Turn off the news channel and the incessant preoccupation with the pandemic and politics. Be creative. Remember the good old days and pick some favourite memories – things you’ve done, places you visited and the people you were with. Share the memories and plan to do it again.

Next year is coming soon. Make plans to make it better.

Don’t sit and wait for somebody else to fix everything that was wrong with 2020.  As David Brooks says in The Second Mountain, “society is a massive conspiracy to distract you from the important choices of life in order to help you fixate on the unimportant ones.”

Learn more about Enlightened Entrepreneurship at: LearningEntrepreneurship.com Read more of Uncle Ralph's advice for Entrepreneurs in Don't Do It the Hard Way & The Complete Do-It-Yourself Guide to Business Plans - 2020 Editions.

Are you ready for post-Covid?

Even in the current period of Covid pandemic protocols that are actually getting stricter, there is still optimism that vaccines will be available early in 2021 and we’ll start the transition to the new world of post-Covid-19 by March. Maybe get back to more tolerable social lives and business activities by May. Maybe September?

Regardless of the timetable, the first requirement, of course, is to stay healthy and financially secure until then. Hopefully, you can count on that from your own resources or from the temporary government support to help get us to the next phase. We’re all being required to overcome new challenges and the pandemic frustrations have heightened anxiety and stress for everyone.  It’s impossible to ignore the legitimate fears and the strains on our support systems, health care and otherwise.

Here are some ideas to consider as you meet the challenges of the current pandemic and plan ahead for the post-Covid era:

Play safe. Take care of each other – family and friends and your customers, employees and associates. These are challenging times and you can be among the Enlightened Entrepreneurs who will lead the way.

Learn more about Enlightened Entrepreneurship at: LearningEntrepreneurship.com Read more of Uncle Ralph's advice for Entrepreneurs in Don't Do It the Hard Way & The Complete Do-It-Yourself Guide to Business Plans - 2020 Editions. 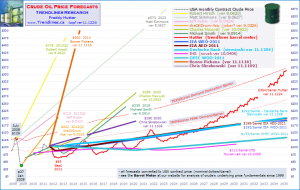 It is that time of year when everyone seems compelled to make forecasts. The experts insist on giving us their version and they decide either to be safe and predict more of the same or to be outrageous and predict something extreme - Canadian dollar at US$0.59 or oil back to $100!

We should ignore them all; they're useless. I have worked on many; in plans and projections for my own businesses and for clients.

It is useful to remember before starting that they are all part of the fiction we are writing to convince ourselves or someone else what we hope will happen. It would be better to describe them as "reasonable expectations." All we know for sure is that the forecasts will be wrong. We just do not know by how much or in which direction.

So if we cannot predict the future, what can we do?

Our primary objective should be to understand our business environment - the competitive landscape and the economic conditions. The real issues to understand are the trends, the causes and effects, the alternative scenarios we need to be prepared for and the most likely ones to occur.

Then we have something we can work with.

And check out two new books by Uncle Ralph, "Don't Do It the Hard Way" and "The Complete Do-It-Yourself Guide to Business Plans." available online or at your favourite bookstore. To learn more or buy a copy: Click here 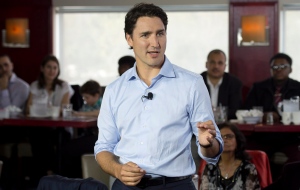 On November 4th, we will have a new Prime Minister (in the second coming of a Trudeau) and a new Liberal cabinet responsible for managing the Canadian economy.

Are you ready for the changes that will affect you and your business?

Do not expect Trudeau to implement all the promises he made. He will inevitably have to make compromises and changes as he bumps into the real-world facts of life in government finances, economic challenges and geo-political issues.

In some cases, he will welcome reasonable excuses for backing away from some bad ideas. The Senate is not the only place for sober second thought. I’m sure his advisors have already coached him on hedging their bets for many issues.  We should not to be too cynical that popular promises were only made during the campaign to get elected without any intention of delivering on them.  I think Trudeau and his team are too smart politically to get caught making that mistake. They were pretty cautious about avoiding specifics so they did not have to contradict themselves. I’m sure the experience and advice of former Prime Ministers Martin and Chretien were helpful with those tactics.

So what can we expect? First, you may be looking forward to that “middle class” tax reduction.  It’s more likely you are going to unhappily discover that you are not in the middle class. For tax purposes, it ends at taxable income of $89,401. Welcome to the wealthy 1%? Then you are going to lose that very useful Conservative tax-splitting opportunity that the Liberals are cancelling (except for retired seniors, like me). And be sure to quickly stuff your TFSA with the maximum available to you while the limit remains at $10,000.  Trudeau’s plan is to go back down to the $5,500 annual contribution limit, but I’m betting he will be wise enough to fumble that file until after the January 2016 contribution limit is available, so that a few of the angry wealthy taxpayers will start to love him a little more.

Now what about the Liberal plan and your business? First the good news. Middle class tax cuts should mean more consumer spending and if you can participate in the proposed infrastructure projects or their spinoff benefits, then you may also see growth in your revenue from those initiatives. If they successfully pump up the economy with their deficit spending plans, then everybody’s business will benefit. Let’s hope it works.

If your business depends on the oil or resource industries, things are going to get worse. Those sectors will be under more pressure from an eco-friendly government listening to the global warming activists. But I think the Trudeau team will also be cautious in this area as they try to prove their mantra that good environmental policy is also good for business. But business leaders will have to do better at satisfying the relevant cabinet ministers that the pace and direction of their energy and environmental programs will meet the desired goals soon enough. There will be some difficult exchanges.

There is a proposal to reduce small business taxes, but the details are still being “reviewed” and the discussion seems to focus on removing loopholes to ensure that the small business tax breaks are legitimate. Hopefully, the newly elected caucus will include some strong advocates for small business and will work on making it easier to succeed, not more difficult.  The proposed changes to Pension Plan contributions (being pushed by Ontario’s Premier Wynne) are also up for discussion, but may well be stalled completely or implemented very gradually. It will be difficult to justify adding another payroll tax to all the existing obstacles for job creation. It does seem to be an important Liberal policy mission, however, to improve future payouts from the Canada Pension Plan.  Expect some changes before the end of this four-year term.

In summary, nothing too radical affecting business or the economic environment is expected, but the generally positive mood arising from the change of government to a young, energetic and enthusiastic team allows us all to be more optimistic about our prospects. However, it will not be enough to simply watch and wait to see how soon the good times arrive and how long they last. Now is the time to engage and move forward with your own plans to make good things happen. Trudeau is right, “better is always possible”.  But it’s up to you.

You may think your little local business is too small or unimportant to be affected by the global economy, but unfortunately there is nowhere that is sheltered from the fallout - good or bad.
It doesn't matter whether it's an oil leak in Louisiana, or a torpedo off Korea, or civil service perks in Greece, the consequences for the global economy will get passed on down to you and your business, wherever you are.  It may be interest rates, tax increases, program cuts, exchange rates or simply changes to your operating costs and demand for your products and services, but you will see a connection.
So what?  Well, obviously you don't have much control over events or any more ability than the plethora of erroneous experts to predict the event.  All you can do is BE PREPARED.  That means plan and manage with a large margin for error.  We live in volatile times and can only expect the unexpected; on top of the potential for the worst case scenarios.
I don't mean to be too pessimistic, it is also possible that things could turn out much better than expected.  Be prepared for that too.
Nobody said it was getting easier.
Learning Entrepreneurship
Permalink
economy, planning