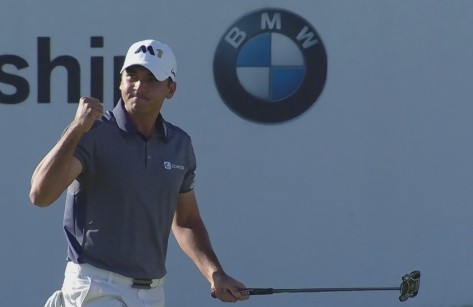 Jason Day achieved his goals on the weekend, winning the BMW Championship, leading in the FedEx Cup standings and becoming No. 1 in the World Golf Rankings.

It was the No. 1 ranking that he was most excited about - a lifelong goal achieved at age 27 after six years as a professional golfer.  And proudly the third Australian after Greg Norman  (before the Tiger Woods reign) and Adam Scott more recently.  Day has been impressive with nearly flawless golf over the last two months and dominant in three of his last five tournaments, including the British and Canadian Opens. He is now one of only five golfers in the last 36 years that have one five or more PGA tournaments in a season.  The others are Tom Watson, Nick Price, Vijay Singh and Tiger Woods - 10 times! (We still can't get used to him not being a threat to win every outing.)

Jason Day announced his goal to be No. 1 eight years ago when he first started on the PGA Tour and was ridiculed for it. It did seem an impossible dream when Tiger Woods was well into his longest reign at the top of World Golf Rankings over the five years that ended in 2010.  And now competition is even tougher, as Day readily acknowledges.  Over the last five years, the No.1 spot has changed names 19 times (three times in the last two weeks between Day, Jordan Spieth and Rory McIlroy) among eight different players, including Woods again in 2013.

Day explains his motivation and performance as being inspired first by Tiger Woods and now by his biggest challengers - Spieth and McIlroy.

Another reminder: competition is good for everybody.